T. S. Eliot wrote an excellent introduction to Pascal’s Thoughts, full of playful expression and humble wit. Well worth the reading. I specially like the semi-conversational styling he adopts: at one point he binds together multiple linked (but separate) comments with an excess of dashes, which, to be fair, is perfectly suited for the style of the Thoughts themselves. He even repeats himself when returning to the original clause. Just good writing.

Eliot raises the spectre of Michel de Montaigne as a fearsome literary force whom Pascal intended to discredit, but whose own essays were so filmy and fluid that they left a mark on Pascal’s meditations. Says Eliot, “By the time a man knew Montaigne well enough to attack him, he would be thoroughly infected by him.”

One element which Montaigne conveys though his essays is a charming natural skepticism toward himself and his subjects. Here is Eliot describing how Montaigne captured this quintessential skepticism of every human being, and the three possible outcomes from that skeptic mind: 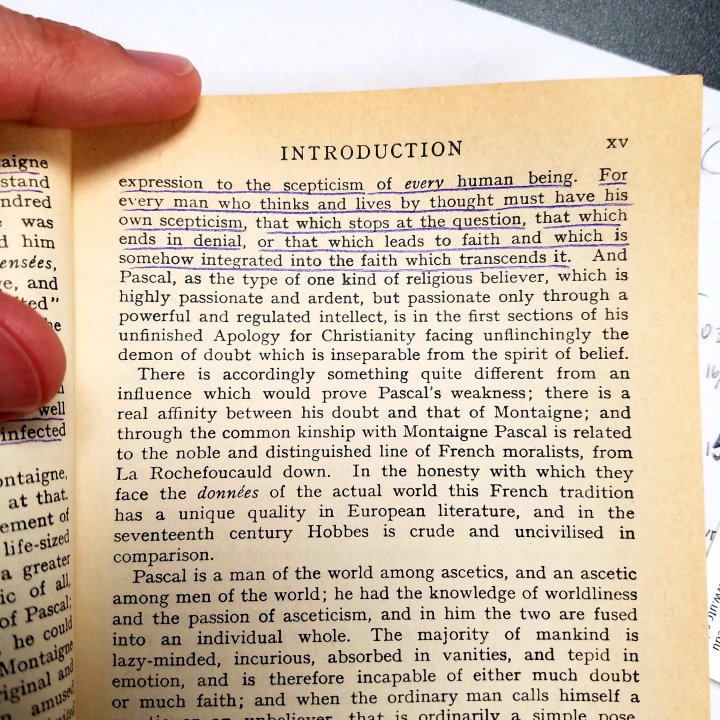 Broken hearts can store up no anger; broken hands can carry neither hatred nor grudge.

The sweetness and power of Dickens’ Christmas Ghosts is discovered in their purpose: they visit Old Scratch in hopes of doing him good. This holy intent rings true as a church bell to the real world around us – for whether we wish to acknowledge it or resist it to the end, the reality of this life is that Good is not haunted by Evil–

Evil is ever haunted by Good.

With the serious writer, violence is never an end in itself. It is the extreme situation that best reveals what we are essentially. … I have found that violence is strangely capable of returning my characters to reality and preparing them to accept their moment of grace. Their heads are so hard that almost nothing else will do the work. This idea, that reality is something to which we must be returned at considerable cost, is one which is seldom understood by the casual reader, but it is one which is implicit in the Christian view of the world.

Happy Thanksgiving Day! It’s been a lovely week of cool sunny weather for various outside adventures, including two nights camping at Fort Yargo and two days paddling the waters both there and at Lanier. And despite presently fighting a cold which descended on me last night, still my heart is full of thanks.

Normally at this point, any self-respecting journal or blog would launch into a laundry list of items suddenly remembered and appreciated for their transcendent value to the individual. But for today, I will spare you mine and leave you to ponder yours.

For the kindnesses of God in this life are truly things good to ponder and not to rattle off. They definitely commas or (an innocently ironic phrase) bullet points. The blessing of this holiday among all others is the way in which it prompts us toward a remembrance mood so that the kindnesses are allowed to steal in upon us. They come – almost so easily that it takes little thought to conceive (receive) them. They come so many that we struggle to pause and ponder them richly.

I shall labour today to consider each prompt of gratitude carefully, and remember with care the Owner of my thanks.

The greatest honor we can give Almighty God is to live gladly because of the knowledge of his love. Julian of Norwich

One of the fascinating aspects of his work is the extent to which he captured, not painted photographs of real scenes, but observations drawn from memory. Wyeth was a dedicated observer, and would take his observations back to a canvas or sketchpad in a room; the artist himself spoke of art being a blend truth and (not beauty but) memory.

Equally fascinating was the fact that most of his artistic life was spent in only two places: Chadds Ford, PA, and Allen Island, Maine. At each residence, he became close friends with neighbors whose lives and dwellings formed the source material of countless sketches and paintings. Much made out of seemingly little: it shows that much is hidden in the small things of life, for the eyes willing and able to see.

Memory is an imperfect mirror. Every memory is turned, lightened and darkened, grainier or smoother than what had been, and in that way it is good fodder for the artistic vision. If you possessed such a talent with paints or with words, what memories would you draw upon to capture the things you care most about?

“…The more I considered Christianity, the more I found that while it had established a rule and order, the chief aim of that order was to give room for good things to run wild. Mental and emotional liberty are not so simple as they look.”

Better than television, this.

There is something particularly Georgian about a mist-shrouded sun climbing over the ridges in swollen motionless air.